Google, Microsoft and Nokia have something in common: they had little choice in some of their latest strategic moves in the mobile arena, maybe their biggest moves in a long, long time. Unusual for such giants, eh?

In this post I argue that Google, Microsoft and Nokia have something in common: they had little choice in some of their latest strategic moves in the mobile arena, maybe their biggest moves in a long, long time. Unusual for such giants, eh?

For the sake of drama and structure I will go from the most obvious to the slightly less evident and finish with the most subtle of the three. 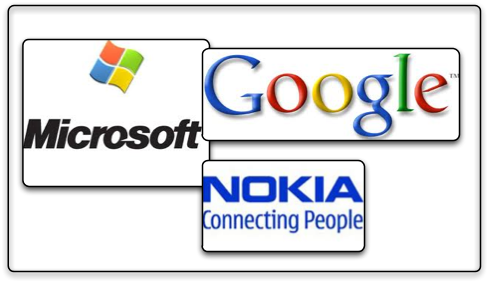 Firstly, there is Microsoft.

It is common knowledge that the old boys from Redmond are in deep trouble in the mobile arena (and still are). After being a major player in the mobile smartphone arena for quite a long time it has gradually become a so-so player, being met by some skepticism by users and critics alike.

Even though Windows Phone 7 received decent reviews it feels like too little and definitely too late.

The Windows Phone 7 rollout still feels too corporate to me and still part of a lukewarm strategy.

Yeah but Microsoft has conquered or at least made a good dent on other markets before, even if just by brute force, yes? (read XBOX).

So why would a juggernaut like Microsoft be constrained in its long-term strategy? Shouldn’t be.

Well, it’s the systems, stupid.
If anything, Apple has taught the industry one thing with the iPod, iPhone and lately with the iPad. Consumers love SYSTEMS.

On top of that Microsoft has learned something on its own, it doesn’t know how to build consumer SYSTEMS at all.

Therefore, to get itself out of the hole, Microsoft considered its options.

Acquisition of a successful company just to go on and destroy it in the process was ruled out, lest it turn into another disaster.

Lesson learned and any acquisitions ruled out, Microsoft then took a look at the OEM market… Err, in the case of MS, it meant HTC, builder of the 80% of cell phones bearing Microsoft’s mobile OS (at least prior the 7th version). Out of 50 partners!

Well, a simple Google search for Android and HTC is quite revealing. HTC didn’t jump ship, not exactly. But it started to be really busy building handsets with that OS.

Well, considering Android had been in the market for a while, a mature product, consumers liking it, with a plethora of apps and -most importantly- being FREE, what do you expect? Considering that MS has been known to thoroughly screw its partners from time to time., who can blame HTC?

Surely, HTC has hedged its bets and is only too happy to license to MS and adopt a wait-and-see attitude to it to see if it sticks and to exploit slow IT corporate policies that still mandate Windows-Everywhere(™). The good old leverage from the fading age of Windows was gone though and Microsoft would feel like second best here.

Choice taken away: traditional OEMs were out.

To add icing on the cake, it would seem that Microsoft had little choice but to license the ARM architecture, surely watched closely by its mobile hardware OEMs who have perceived it as yet another sword hanging over their little necks. A sword that would materialise as Microsoft mobile hardware. Uh-oh. Again, Microsoft has had to take some eggs from the software-only basket and put them on the systems one though only as a last resort (see Kin fiasco).

No pure-OEM model then. No acquisitions. Definitely not Android. SONY? You gotta be kidding. No Microsoft hardware (yet). Samsung maybe? Nay.

It had to be Nokia then. It’s smartphone marketshare in decline, Microsoft couldn’t go anywhere else.

Which leads nicely to the next big boy, Nokia itself.

Nokia is a giant. Massive with customers, it has created remarkable legendary mobile designs. However, its fortunes -or at least its marketshare lead- got reversed and were showing a worrying trend.

The new CEO put it very well himself, the company is in dire straits indeed, at least in the long term.

Nokia understands systems and consumers very well, probably much more than Microsoft does or has ever done. With that in mind, Elop and senior managers understood that Symbian is a thing of the past that. Meego wasn’t ready and perhaps would never be good enough.

But, wait? A company the size of Nokia has lots of engineering talent! Yes, but also lots of middle managers and lacklustre leadership, if one is to believe Nokia’s top brass.

Therefore, culling the company of useless meddlers and taking the time to isolate a dedicated, motivated and driven team to push Meego (much like what Palm managed to do with its WebOS) up to scratch would take time, too long. If I remember correctly, it took Palm the better part of two years or more to get WebOS near 1.0-status and that is an heroic feat. Time though, is not something Nokia had available. Option out.

Acquisition? Nokia doesn’t strike me as an acquisition-crazy company.

Firstly, a nimble startup would understandably have a hard time integrating into a company of 12.000+ employees.

Secondly, while the Trolltech acquisition had some technical merit, it was completed in 2008 and Nokia has’t really made Qt onto the big promised paradise it was intented to. And they have had plenty of time to do it.

And finally, who to buy? RIM? Are you kidding? Making the company bigger and having a huge corporate cultural clash to boot?!? And getting RIM’s loony CEO(s) onboard?

Nay, purchasing its way out of trouble, choice taken away.

Which lead Nokia to consider Android.

One can imagine Nokia seeing Android as the forbidden fruit of sin. Juicy, tempting, free for the taking… and ultimately damning.

Oh, there is the legal swamp. Before taking a bite out of the fruit, Nokia must have had it’s lawyer legions take a good look at it.

If that was not to scare the Nokia strategist what would?

Well, I would argue that the real reason is freedom. Freedom to differentiate. As the Symbian guys put it “[…] surrender too much of the value and differentiation ability, most obviously in services and advertising, to Google.” Exactly. Nokia would play on the same field as all the other OEM. Bummer, from leading systems developer down to mere squabbling OEM.

Surely Nokia had been following what happened to Motorola and the Skyhook guys.

Apparently, both Motorola and ‘Company X’ (believed to be Samsung) have been prevented by Google from shipping handsets bearing its location technology. Remeber Navteq? Ever heard of Nokia maps?

Jump onto the Android bandwagon and kiss goodbye to all that.

So Android being out what was left as an option? A company in desperate need?

Which leads to the idea of Google having courted Nokia precisely for many of the reasons Microsoft ‘bought’ them in the first place.

Finally, Google is the third big one having run out of options on some of its most strategic options.

Consider the official gospel on why Google created Android and released it to the wild. Well, most of it, anyway.

According to Vic Gundotra from Google:

“If Google didn’t act, it faced a draconian future where one man, one phone, one carrier were our choice. That’s a future we don’t want.”

Sounds chivalrous and following the ‘Don’t be evil’ mantra. Google released Android to save us all from that bleak future.

Consider Google’s business model. It revolves around advertising and to do well in advertising you need eyeballs, lots of them. Furthermore, to do very well you need targeted eyeballs, that is, to show the right adverts to the right people, to maximise chances of these people hitting the ads.

Google’s business model elevator pitch: person would like to get a service or product on the Web. Cool, she fires up Google on her desktop or laptop and does a search for the terms she thinks will help her find that product or service. Maybe clicks on the ads, maybe finds what she is looking for, maybe not. Bonus points: does more searches through Google, refining the terms (translation: getting more targeted ads), finally finds what she is looking for. This happens millions of times. Google makes tons of money.

Whereas if that same person would like to get a service or product on her iPhone, the story is completely different. Cool, she fires up the App Store app, does a search or browses the categories. Looks at the top charts, reads the reviews and how many stars the candidate solutions have, ponders wether to pay or get a free app, etc. Person chooses app and installs it. Google gets zero money. Zaroo, zip, nada, nothing.

There are a few things that need to be considered:

Google knew that smartphones and later tablets would be the devices the mass market consumer will use to access the Internet. iOS was looking good and demolishing the competition at the time. It seems to be doing the same now.

The App Store is a ‘Google search’ replacement.

I would say that Apple wasn’t expecting it to become so successful. I would add that Apple didn’t set out to build a Google search replacement when the App Store was built. Apple engineers and product managers only wanted to create a better experience for consumers than googling vague terms, shuffling through specialised review sites, getting malware off dubious websites, etc. Google is collateral damage.

Google knew it had to act, very fast and with very decisive steps. Apple’s competition was in shambles and couldn’t get their stuff together for the life of them. Microsoft Windows Mobile 6.x was crap and any real future releases years into the future, RIM was -is- a shadow of its former self and Palm was on its last legs. Google couldn’t wait on them.

Android was born and released for free. Had to be. Google didn’t have any other choice. What they really imagined was a mobile future sans Android, where Apple would rule. Imagine if Android didn’t exist what the marketshare of Apple would be on smartphones today and Google wouldn’t be able to continue making money on it. That is the future Google didn’t want.

A corporate strategy is about having a vision and making it happen and the three giants have lost the initiative.